RTR was a mother living in Bondi with her two sons. When police arrived at her home to arrest one of her sons (for an unrelated matter), RTR, as a concerned mother, took out her mobile phone and began recording the actions of police. Police took RTR’s son outside and threw him roughly onto the ground. As RTR continued to record, one police officer grabbed RTR by the wrist and snatched the phone out of her hand. The officer proceeded to arrest RTR. Police detained RTR and charged her with hindering police in the operation of their duty and resisting arrest.

Following the dismissal of the charge, RTR contacted O’Brien Solicitors to launch a civil suit against the police for assault, battery, false imprisonment and malicious prosecution. The substance of the claim was that RTR was acting within the law when she filmed the police; therefore, her arrest and subsequent detention were unlawful, and the charges brought against her were without a proper basis.

The applicant filed a statement of claim, and the suit proceeded to a mandatory mediation. During that mediation the police agreed to pay RTR a sum in settlement. This case shows that citizens are well within their rights to record police in the course of duty, provided that the individual doesn’t hinder the police operation. Merely recording is not hindering.

In 2013 NSW Assistant Commissioner Mark Murdoch told The Sydney Morning Herald: “We understand and accept and in fact support the right of the community to film anyone in a public space… The police need to be mature enough to know that everyone on the street basically has a mobile phone with camera capability and they are going to be filmed.”

This case shows that if an individual is arrested for recording police, they are able to bring a claim in false imprisonment, malicious prosecution, assault and battery. 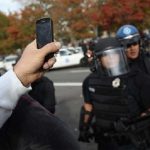